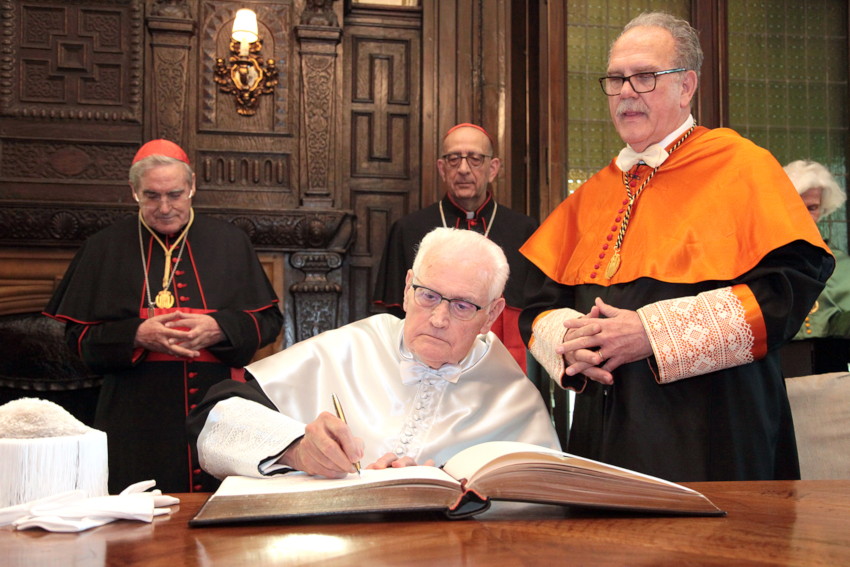 The YouTube channel of the Royal European Academy of Doctors-Barcelona 1914 (RAED) already has the video summary of the act of admission as full academician of Antoni Matabosch, doctor in Theology, which was held on April 25 in the Hall of Acts of the Catalan labor Promotion of National Work, headquarters of the Academy. The recipient read the admission speech “Societat plural i religions” (Plural society and religions). On behalf of the Royal Corporation answered the full academician and president of the Experimental Sciences section David Jou. The event was attended by the Cardinal, Archbishop Emeritus of Barcelona and honorary academician of the RAED Lluís Martínez Sistach, who presented the diploma to the new academician, in addition to the Cardinal and current Archbishop of Barcelona, ​​Joan Josep Omella.

In his speech, the new academician drew a complete religious map in Catalonia and Spain, analyzed the evolution of ecumenism and raised the patterns of fit of religions in society based on a historical perspective of interfaith coexistence. A point in which he raises a criticism of the model of French secularism. Finally, he proposed a set of measures to improve the model he defines as non-denominational or positive secular.

Matabosch was ordained a priest in Rome in 1959, he has a doctorate in Theology from the Pontifical Gregorian University in Rome and a degree in Communication Sciences and Contemporary History from the Autonomous University of Barcelona. He is professor emeritus of the Faculty of Theology of Catalonia, of which he was dean between 1978 and 1988. He was a delegate of University Pastoral, Secular Apostolate and Economics of the Archdiocese of Barcelona, ​​director of the Higher Institute of Religious Sciences of Barcelona and president of the Joan Maragall Foundation, among other prominent positions. He has published ten books and hundreds of articles on cultural issues, ecumenism and relationship between faith and culture.

Daniel Turbón, promoter of the Teaching Innovation Group of Biology and Culture of the University of Barcelona, enters in the RAED