We would like to take this opportunity to pay homage to the legacy of our various deanships, as each one has proved to be a cornerstone of our academic history. We must nevertheless not forget that the governing teams and academics who have passed through the institution are the true protagonists of the century-old history of the Royal European Academy of Doctors. The respective deans are, to be more precise, the personal figureheads of this collective effort that has led to the Academy achieving the prestige and intellectual solvency that it now enjoys. Dr. Álvaro Esquerdo (Villajoyosa 1853 – Barcelona 1921) was the founder, in 1914, of the Association of Enrolled Doctors of Catalonia, of which he was the presiding dean until 1921. This association was the initial incarnation of the present Royal European Academy of Doctors.

Although it might appear that the doctors registered in the Association of Enrolled Doctors of Dr. Alvaro Esquerdo were solely interested in their own personal advancement and that of the group, their purpose was in fact to dignify the title of “Doctor” and afford some prestige to a professional activity that had by that time suffered considerable deterioration. The election as first presiding dean of Dr. Esquerdo, an eminent surgeon and man of science, marked the beginning of this raising of the status of the title in Spain, both for holders of university doctorates and for those exercising a profession. This was the symbolic laying of the first stone of what was to be a grand edifice of wisdom for subsequent generations of doctors. Pedro Gerardo Maristany y Oliver (Masnou 1863 – Barcelona 1926), created Count of Lavern by Spain’s King Alfonso XIII, was – between 1921 1926 – the second presiding dean of the Association of Doctors. Thanks to his close friendship with the monarch and in honour of the royal recognition that this entailed, King Alfonso XIII agreed to preside over the solemn academic ceremony of the Association of Doctors that took place in the Great Hall of the University of Barcelona on 27th May 1925. A successful entrepreneur and also a man of science (with degrees in both pure science and physics and chemistry), Pedro Gerardo Maristany, Count of Lavern, was a figure to live up to in his day, with his combination of scholarly passion and businesslike pragmatism.

His good works also contributed to the advancement of both primary and university education. He likewise endeavoured to involve the King in the activities of the Association of Doctors, as evidenced by the presence of Alfonso XIII at the solemn ceremony held at the University of Barcelona in 1925. This was the first occasion – but it would not be the last – on which a Spanish monarch took a direct interest in the matters of a core association of academics which, with the passage of time, would ultimately be transformed into an academy. Seen from an historic perspective, Guillermo de Benavent († Arenys de Mar 1963) had to face up to difficult times during his deanship, which he exercised either de facto or in an acting capacity. We should add that the period between 1926 and 1943, which included the Second Republic, the Spanish Civil War and the tough privations of the post-war era, was also marked by periods in which the association suffered a clandestine existence or even hibernation.

The Spanish Civil War ended in 1939, but Dr. Benavent had to wait until 1943 to be officially appointed Dean of the Association of Doctors. It was in this capacity that he approached Spain’s then head of state, Francisco Franco, to communicate the objectives of the institution that he now led. This occurred at a memorable audience held on 15th March 1944 at the Pedralbes Palace in Barcelona.

The main objective was none other than to dignify the title of “Doctor”. Apart from interesting the authorities of the day in the issues surrounding the doctoral concept, Benavent invited a number of important figures from the fields of research and university teaching, along with politicians and persons of institutional importance, to participate in a forum held by the Association of Doctors in its efforts to express the excellence of the doctoral qualification. The memorable events of the deanship of Dr. Xifra (Figueres 1926–) include several academic-year inauguration ceremonies attended by distinguished speakers, which helped to raise the institution’s level of prestige. Three yearbooks were also published during this period. The beginnings of his deanship were marked by an urge for renewal.

Dr Xifra’s biggest achievement overall was to raise the social profile of the then Association of Doctors through the holding of conferences and brilliantly organised academic-year inauguration ceremonies, both of which involved the participation of important intellectual figures of the day. In this sense we can say that Dr. Xifra had excellent public relations skills and that he was a tireless promoter of the institution’s image. 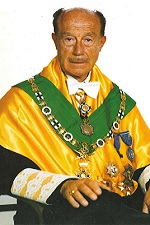 With democracy recovered in Spain, Dr. Dolcet (l’Hospitalet de Llobregat 1909–Barcelona 1994) was the originator, along with his successor Dr. Casajuana, of the Academy’s efforts to gain corresponding legal and public recognition. This had already been granted in 1966, but suffered from a certain ambiguity thanks to Spain’s Law of Associations of 1964. This step, taken under the auspices of the Generalitat de Catalunya, Catalonia’s autonomous regional government, proved to be vital to the institution’s future. It amounted in fact to a complete reorganisation.

Another initiative of this deanship was to add during a time an itinerant aspect to the Academy’s institutional activities, with solemn sessions held in Catalonia’s other three provincial capitals and a project, which was never actually realised, to hold a further session in Palma de Mallorca in the Balearic Islands. This deanship also saw the initial negotiations that would culminate, during the subsequent period in office of Dr. Casajuana, in the addition of the “Royal” prefix to the Academy’s name. This deanship, the longest in the history of the RAD, was marked by the intention of Dr. Casajuana (Vacarisses 1923-Barcelona 2013) to intensify to the greatest extent possible the links between the RAD and the Spanish monarchy. The new dean saw this as a sure way of raising the institution’s prestige.

He was able to his great satisfaction to mark up two notable successes in this respect, albeit with a separation of fifteen years between them; namely the presence of the Spanish King at two solemn sessions held in Catalonia’s Palace of Music in 1992 and 2008 respectively. These successes compensated to some degree for the drifting internal life of the Academy, as evidenced by the low number of meetings held. The Royal Academy of Doctors, now legally consolidated since 1990, has found a promising new leader in Dr. Alfredo Rocafort (Barcelona 1949). He has encouraged the work of the institution’s various sections and opened the organisation up to channels of academic internationalisation. Good evidence of this work can be seen in the more than three years that have passed since his appointment, with the inauguration of a new, well-equipped headquarters to house the developing academic activities concerned. The Academy has also celebrated the centenary of its founding and published some ten editions of RAD Tribuna Plural, the Academy’s own scientific journal. The governing board of the present dean has preferred in this respect to include the contents of the classic annual yearbooks in the various issues of this journal, in order to reflect the fluidity and dynamism of the scientific and academic information involved. The Academy has also published almost fifty volumes of a variety of collected documents, and the institution’s website (www.radd.eu) ensures that the events that it organises are given full online prominence.

This modernisation, as well as a more dynamic participation by the academicians concerned, enriches what is now known (as of February 2016) as the Royal European Academy of Doctors (RAED), thus setting its course to becoming an academy of reference both within Spain and internationally.