Good governance in the face of uncertainty

Lorenzo Gascón, honorary academician of the Royal European Academy of Doctors-Barcelona 1914 (RAED), participated in the 10th edition of the World Policy Conference, which was held between the past 12 and 14 October in Marrakech under the high patronage of the King of Morocco, Muhammad VI, and brought together leading statesmen and senior figures from the world of economics, business, politics, diplomacy and culture such as Laurent Fabius, former prime minister of France; Miguel Ángel Moratinos, former foreign minister of Spain and high representative of the United Nations for the Alliance of Civilizations; Jean-Claude Trichet, former president of the European Central Bank and honorary governor of the Bank of France; Muhammad Laichubi, former minister of Labor and Social Security of Algeria, or Paul Kagame, president of Rwanda, among other personalities. The prestigious event focuses its efforts on helping to improve all aspects of governance, with a view to promoting a more open, prosperous, fairer and more respectful world of diversity. Its founder and president is Thierry de Montbrial, corresponding academician of the Royal Academy. 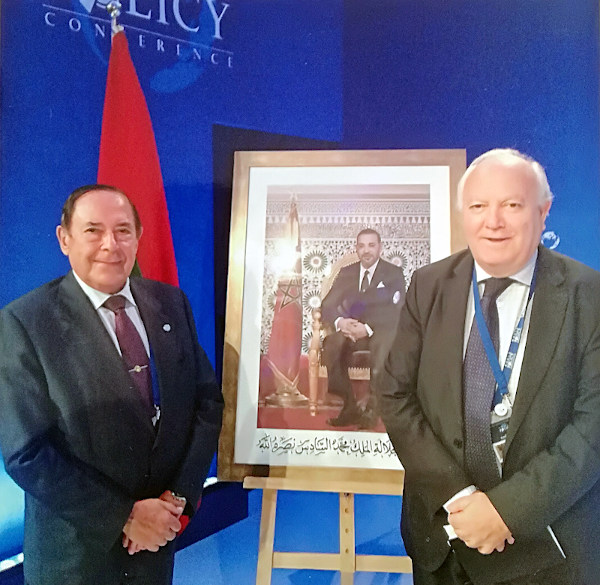 “Since the first edition of the World Policy Conference, which was held after the bankruptcy of Lehman Brothers to warn already of the serious economic and financial crisis looming over a global world, the world has also seen the outbreak and dramatic failure of the so-called Arab Spring, catastrophic policies based on American neoconservative ideology, the intensification and spread of Islamist terrorism, the massive growth of refugee flows, the rise of nationalism even in Europe… Although it should be noted that they also respond to other causes, all these crises are directly related to the bad governance and hasty expansion of the European Union after the fall of the Soviet Union and the entire Eastern bloc. History has at least three lessons to teach us: the countries that play with the political regimes of other states they do so at their own risk, each nation matures in its own way and at its own pace and keeping the world reasonably open assumes that the main stakeholders will comply with the rules. That is probably the most basic point of what is called global governance, a point that applies to all scales”, De Montbrial reflected in the preamble of this 10th edition of the World Policy Conference.

In this sense, the meeting analyzed the current geopolitical crises and current problems such as migration, the commercial war between China and the United States, the impeachment of Donald Trump, the climate crisis or the ambitious project of the new Silk Road which promotes the Chinese Government. “In the last decade a new type of cold war has emerged, pushing Moscow into the arms of Beijing. Meanwhile, Iran is also looking towards China with growing interest. Naturally, the People’s Republic intends to exploit these favorable circumstances to to move forward with its new Silk Road project and, in particular, to establish itself in the Middle East, today’s world is more difficult to understand than yesterday, risks are increasing, often with immediate economic consequences. Good governance is key”, analyzed the driver of this benchmark meeting.

All participants were conjured to contribute to bring responsibility and common sense of good governance to their countries and governments, signing the meeting document. “To many observers, today’s world seems indecipherable. The Earth is in such danger that some scientists speak of a new accelerated geological era. The resurgence of barbarism and terrorism in the name of religion is seen as a historical regression. At the same time, the waves of technological innovations are constantly increasing, particularly in the fields of energy and information, sources of economic, ecological and social transformations. These advances point to an accelerated evolution of the human being. The present has never been subjected to a tectonic clash between its future and its past, whose consequences seem difficult to foresee and, at times, can be distressing. Between the naive belief in the unlimited benefits of technology and the resignation to the cycle of calamities, there is room to build a global governance with the objective of organizing a geopolitical order to obtain the best of the human experience”, they concluded.

Felio Vilarrubias, reference in the studies of Commercial Law, enters at the Royal Academy

The mathematics of music