Javier Gil Mur, rector of the International University of Catalonia and full academician of the Royal European Academy of Doctors-Barcelona 1914 (RAED), was invested last March 14 honorary doctor by the University of Havana. The solemn ceremony opened the International Biomaterials Congress (Biomat 2018) that hosted the centre during the following three days and in which the academician also participated as an expert.

The investiture was attended by José Ramón Saborido, minister of Higher Education of Cuba; Rubén Álvarez, president of the UNESCO Chair of Biomaterials, and Gustavo José Cobreiro, rector of the University of Havana, who was accompanied by all the deans of the faculties of the centre and a good part of the academic faculty. Yaimarilis Veranes, president of the organizing committee of Biomat 2018, read the certificate of delivery of the title and highlighted how Gil Mur has contributed to the training of more than 200 Cuban professionals of different specialties.

Doctor in Chemistry by the University of Barcelona, ​​Gil Mur has spent a good part of his teaching career at the Polytechnic University of Catalonia, where he was a professor, director of its Technical School of Industrial Engineering and vicerector. He also held the position of commissioner of the Catalan Government for the development of the Campus Diagonal-Besòs before being elected rector of the International University of Catalonia. He is the fourth rector of this university centre. 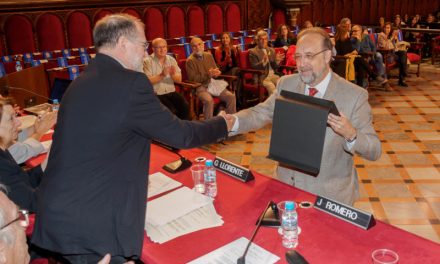 The long fight against sudden death

Eric Maskin, Nobel prize in Economics and honorary academician of the RAED, receives an honorary doctorate from the University of Cambridge

A tribute from Japan