Francisco López Muñoz, professor of Pharmacology and director of the International Doctoral School of the Camilo José Cela University and full academician of the Royal European Academy of Doctors-Barcelona 1914 (RAED), taught last July 27 at the Studies Home of Villanueva de los Infantes in Ciudad Real the conference “La terapéutica farmacología en la obra de Cervantes” (The therapeutic pharmacology in the work of Cervantes), in an act that presented by Vicente Arias, vicerector of Institutional Relations of the Saint Thomas of Villanueva Infants’ Free University.

In his presentation, the academician made a tour of pharmacological therapeutics in Golden Age in Spain and analyzed the work of Cervantes from the perspective of the use of pharmacological agents in different scenes: from therapeutic remedies, mainly for the treatment of insane, crazy and alienated, very frequent characters in the Cervantine literature, to toxic and poisonous agents, mainly hallucinogens and narcotics, in the field of the practice of witchcraft and sorcery (love filters, poisonous potions), passing through the compounds antidotals (unicorn horn, bezoars stones) and substances of abuse (witch ointments).

The use of different substances as ingredients of these compounds, both by the official medicine and the heterodox practice carried out by different healers, didn’t allow to clearly differentiate between medications and poisons, this difference being many times only in the administered dose, in the individual susceptibility or in the differential process of organic accumulation. Suffice it to recall, in this sense, the words of Paracelsus in his work “Defenses”: “Everything is poison… Only the dose makes the poison”.

In the course of his speech, López Muñoz defended the hypothesis that Cervantes was influenced by the work “De Materia Medica”, by Dioscorides, translated and commented on by the Segovian Judeoconverse physician Andrés Laguna, to be documented in pharmacotherapeutic matters. It’s based, among other elements and according to the opinion of the academician, on the existence of this technical work in the private Cervantine library, according to the reconstruction of the same carried out a few years ago. In fact, the “Dioscorides” is the only work of a scientific-medical nature that Cervantes cites throughout his literary production, specifically in “The Quixote”. 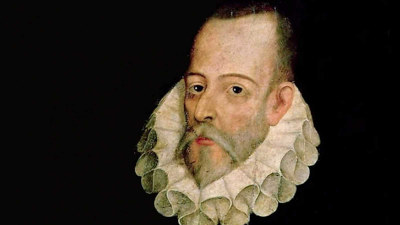 In addition, it’s common, as the researcher has shown in his numerous publications on this subject, the use by Cervantes of similar descriptions to those provided by Laguna: the therapeutic properties of rosemary in the treatment of wounds and trauma in “The Quixote” , the narcotic effects of opium in “The jealous Extremaduran”, the psychedeleptic effects of some love filters in “The lawyer of glass” or the toxic effects of some poisons in “The English Spanish woman”. He has even confirmed that, in some cases, some paragraph of Laguna’s comments in his “Dioscorides” is almost literally cited, such as the purgative effect of rhubarb on excess cholera in “The Quixote” or the hallucinogenic effects of witch’s ointments in “The colloquium of dogs”.

Francisco López Muñoz concluded by commenting that Cervantes demonstrated in his works to have extensive knowledge of medicine, in addition to the reading and management of various therapeutic treaties, such as the aforementioned “Dioscorides”, also for its close relationship with the healthcare world through his family environment and friendships. In sum, the Cervantine texts, despite not being, in any way, scientific treaties, allow, in the opinion of the academician, a wise approach to the uses and effects of pharmacological agents in late-Renaissance Spain.