The RAED recalled the Nobel laureate on the centenary of his birth, in the presence of his nephew and a specialist in his work, Adolfo Sotelo The Royal European Academy of Doctors-Barcelona 1914 (RAED) paid tribute to Camilo José Cela on the centenary of his birth with the academic session “Centenario de un premio Nobel: Camilo José Cela” (Centennial of a Nobel laureate: Camilo José Cela), held in Barcelona on 27 November. The session, forming part of a cycle of events entitled “Personajes de la Historia” (Characters from History), was moderated by Xabier Añoveros, full academician and vice president of the RAED, with the participation of Julio Pérez Cela, doctor in Engineering, nephew of the honoree and vice president of the Foundation Camilo José Cela and Rosario Conde, and Adolfo Sotelo, Professor of History of Spanish Literature at the University of Barcelona, ​​specialising in the work of Cela.

Pérez Cela began his speech by explaining Cela’s family background: his Galician branch, his first surname, and the English, second, until the writer’s birth in Iria Flavia. He then focused on the son of Camilo José Cela, who explained his family and university career -he is a professor of Philosophy of Law at the University of the Balearic Islands– and above all his efforts to highlight and keep alive the importance of his mother, Rosario Conde, in the organisation and literary success of his father. He finished his speech by referring to the origins of the Foundation in Guadalajara, where the writer lived his last years until his death on 17 January, 2002.

Sotelo, meanwhile, reviewed the life of Cela from childhood and youth, highlighting the importance they had in his future literary life postwar, his involvement with the Spanish fascist Falange, his position in the apparatus of censorship of the regime and his friendship with many writers and thinkers both official and clandestine of the Spain of that time. The scholar reviewed one by one the works of the Nobel laureate, from “Pisando la dudosa luz del día” (Stepping into the dubious light of the day), a poetry book written in 1935 with the influence of Federico García Lorca, Pedro Salinas and Pablo Neruda, until the publication of “La familia de Pascual Duarte” (The family of Pascual Duarte). A work that although at the beginning did not enjoy excessive success, because of the gloomy of its text, little in agreement with a Spain that wanted to forget a fratricidal war, the strength of its prose turned it into a successful and groundbreaking novel, the most translated work in Spanish after “Don Quixote”.

Sotelo also reviewed reference works such as “Pabellón de reposo” (Rest Pavilion), a novel based on and written in the period when he was recovering from a relapse of tuberculosis in a sanatorium in the mountains of Madrid, and “Nuevas aventuras y desventuras del Lazarillo de Tormes” (New adventures and misadventures of Lazarillo de Tormes), prior to his culminating achievement: “La Colmena” (The Beehive). A novel that had many difficulties with the censors, and was finally published in Buenos Aires in 1952. The professor also commented in detail the Venezuelan literary adventure of Cela to write “La Catira” (The Catira) and the preparations and development of his trip to the Alcarria that culminated with the appearance of the most original and widely read travel story in the Spanish language. Sotelo also emphasized the importance of two other novels: “Mrs. Caldwel habla con su hijo” (Mrs. Caldwel speaks with her son), about a curious and tormented maternal-filial relationship, and “Mazurca para dos muertos” (Mazurca for two dead), one of the three novels of content and Galician development he had planned to write, but it was left in one. It’s a novel of rural Galicia with its crudeness, its poetry, its symbolism and its realism.

Video summary of the act

Four years of homage to the Spanish language 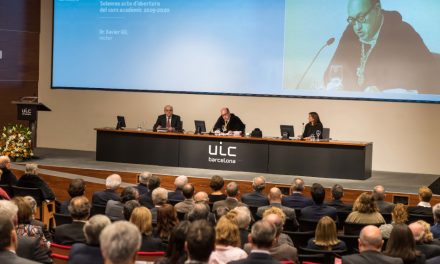