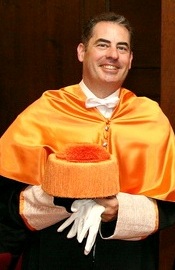 Professor and academician Dr. Mario Barquero is devoted to research in the field of Economic and Social Sciences major in Institutional Public Relations and Management as well as in Marketing and Market Research and dedicated to University Education for more than twenty years.

His research has allowed him to be acknowledged as Academician of Real Academia de Ciencias Económicas y Financieras de España www.racef.es (Spanish Royal Academy for Finance and Economical Sciences), as well as Academician for Madrid of the Reial  Acadèmia de Doctors and as Academician of Advide Superior Europeo de Doctores, www.consedoc.com (European Board of Governors of Professors), organization in which he holds the General Manager position.

He is considered to be one of the most acknowledged professionals in the field of Public Relations, being one of the first ones in applying those techniques in Spain in within different sectors such as Finance, Stock Market, Banking Industry, Business and Companies and Relational Marketing. Leading Media Corporations at a national level, like the Spanish financial press ‘Expansión’ and ‘Cinco Días’ have included his research studies in their respective encyclopedias devoted to Business Management. He is currently the CEO of the School for Higher Education ESERP, Escuela Universitaria ESERP, assigned to Universidad Rey Juan Carlos, as well as a lecturer in the before said University for the Business Economy Department, giving his lessons in different subjects of Postgraduate Studies, Strategic Marketing and Public Relations. He combines his work as researcher with his professional activity in Business and Corporate Management, as Accounting, Financial and Tax Advisor in several Spanish and foreign Societies.

He is registered as a professional in the field by Ilustre Colegio Central de Titulados Mercantiles y Empresariales de Madrid, being his registration number the following: 10629. He is also a freelancer and collaborates with Colegio Oficial de Publicitarios y Relaciones Públicas providing services related to Public Relations and Media under the registration number 57. He has worked in various companies as a Project Manager constantly assisting Consultancy firms on Communication Strategies, Product Launch studies, holding meetings, seminars and talks in relevant events. He also collaborates with some other European and American Corporations, assisting in the subjects related to Lobby issues and its consequences.

Due to his contribution to the Business Management, he has been awarded and Honorary Doctor by the Universidad de San Andrés de Chile and Honorary Professor by different university institutions.