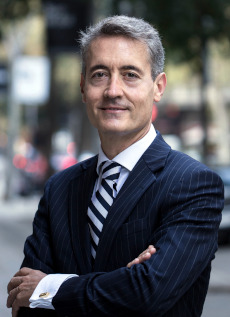 Dr. José Daniel Barquero is university tenured professor of economics and social sciences. By vocation, he has devoted
himself to studying, research and teaching, being awarded for his contribution and work with the Command of the Order of
the Civil Merit and the title of Doctor Honoris Causa in America, Europe, Asia and Africa.

He received his PhD with maximum distinction in Economic Sciences, Law Sciences and Social Sciences from the University Camilo José Cela, The International University of Catalonia, and the Autonomous University of Coahuila,
Mexico, respectively.

In the scientific context, he is Chief Executive Officer of ESERP Business & Law School, based in Madrid, Barcelona and Palma de Mallorca, Spain. Chairman of the European Council of Doctorate Degree Holders; Academician of the Real Academia de Ciencias Económicas y Financieras de España and Academician of the Royal European Academy of Doctors of Spain. He also belongs to the Academia Iberoamericana de Doctores. Members of these Institutions include several Nobel Prize winners.

Internationally, he has researched and worked in the United States with Prof. Dr. Edward L. Bernays Freud (Advisor to Presidents of the United States and the White House); in the Kingdom, with Prof. Dr. Sam Black (Advisor to Her Majesty the Queen of England and some Bristish leading companies). He has published the results of their studies in publishing companies such as Deusto, McGraw-Hill and Planeta.