José Daniel Barquero, general director of ESERP Business & Law School and full academician of the Royal European Academy of Doctors-Barcelona 1914 (RAED), received on March 11th the European Gold Cross granted by the European Development Foundation and was appointed distinguished member of this institution. Founded in 1991 in Barcelona to keep alive the spirit of the Charter of Paris, signed by the 32 European States participating in the Conference for Security and Cooperation in Europe, the Foundation recognized the contributions and research on Europe and Europeanism and promotion of the European unit of Barquero.

These investigations of the academician of the RAED have been published by the American publishing house McGraw Hill under the title “Los estados Unidos de Europa” (The United States of Europe). A work co-authored by European specialist Félix de la Fuente and co-authored by Jordi Castellà de Cot, founding president of this institution.

Other important personalities were also honored for their contributions to the development of European society. as Fernando Aznar, lieutenant general inspector of the Spanish Army; Rosa Maria Calaf, international television correspondent; Santiago Ferrándiz, co-founder of the Medical Emergencies System of Catalonia; Vicente Garrido, general director of the Foundation of the Institute of International Issues and Foreign Policy; Celestino Lamas Bolaño, president of the Lamas Bolaño group; Antonio López-García, plastic artist; Georgina Rigola, director of the International Dance Competition of Barcelona and BCN City Ballet, and Maria Serrat, general director of the Conservatory of the Gran Teatre del Liceu in Barcelona. On 21 February, Barquero also received the Spanish Commendation of the Order of Civil Merit for his contributions to science and university education, both from the academic institution that directs and the research that has developed over more than three decades on the social and economic sciences. 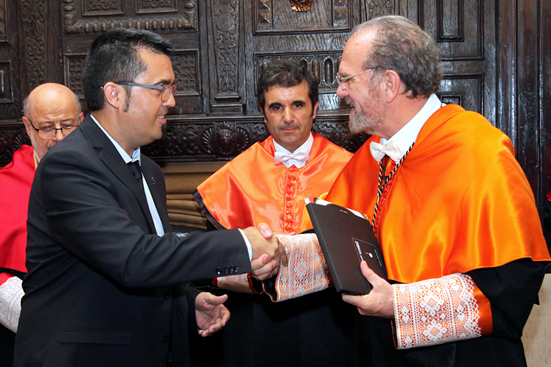 The long fight against sudden death