Senator Santiago Castellà, full academician of the Royal European Academy of Doctors-Barcelona 1914 (RAED) and general secretary of the Pro-Royal European Academy of Doctors Foundation, published in the August 14 edition of the Catalan newspaper “Diari de Tarragona” the article “Europa en las arenas del Mediterráneo” (Europe in the sands of the Mediterranean), where he insists on the responsibility of the European Union to rescue and welcome immigrants. “The European Union perishes under institutional weakness to achieve an equitable and realistic agreement between its member states and to fight against this problem. But it also has a duty to itself, with its legal values ​​and commitments, which is also a pedagogy duty with the whole of the world”, he says.

For Castellà, “this Europe incapable of giving a collective and joint response to the humanitarian emergency on the Mediterranean coast not only endangers the lives and dignity of hundreds of people, but also the universalistic humanist project based on the primary respect for the human dignity above all other considerations, the rejection of tyranny and regimes based on inhuman and repressive policies and the prevalence of law as an objective space for rational discussion among nations”. In this regard, the senator appeals to the fulfillment of the United Nations Convention on the Law of the Sea of ​​1982, which establishes the obligation of the signatory countries to provide assistance to any person who is in danger of disappearing at sea. 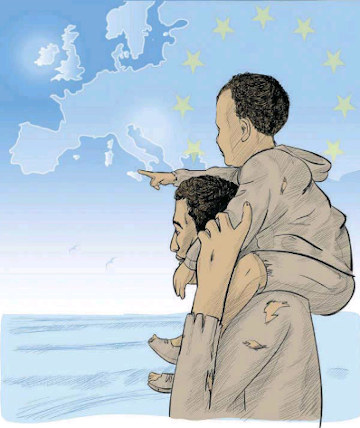 The academician of the RAED considers that this systematic breach of this and other international treaties referring to the asylum of immigrants only responds to the weakness of European governments and institutions and a wave of populism that threatens to end the European democratic guarantees and, by extension, the entire Western world. And he asks public opinion to force its leaders to fulfill their responsibilities.

He currently combines his responsibility as director of the Tarragona Smart Mediterranean City Chair with the direction of the Master of Smart City Managenent of Zigurat-University of Barcelona. He began in the political life of the hand of Adolfo Suárez as general secretary of the Youth of the Spanish Democratic and Social Center, to join a few years ago in the project of the Socialists of Catalonia. He is patron of the Francesc Ferrer Guàrdia Foundation, of the Trencadís Foundation for Modernism in Tarragona and promoter of the Carme Chacón Foundation.