Posted by RAED | Jun 24, 2019 | Academicians of our centennial history, Other news

The creator of Hispanic philology 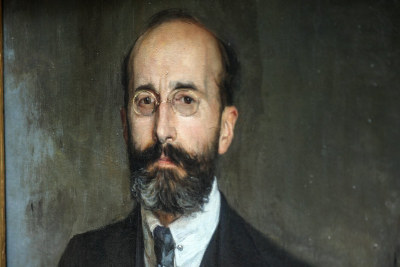 The Royal European Academy of Doctors-Barcelona 1914 (RAED) begins with the immeasurable scientific figure of Ramón Menéndez Pidal a series in which it recalls the most remarkable academicians of its centennial history. Great figures of science and thought of international scope that left their mark on the institution and that the current Governing Board wants to thank, recognize and claim, in the conviction that who has no memory, has no future. The selection of these selected academicians is the result of the research carried out for the publication of the “Book of the Centennial” of the Royal Academy, published three years ago.

Menéndez Pidal was recognized as honorary academician by the Royal Academy in 1966, after working actively with the Royal Corporation between 1945 and 1962 and reading in its bosom, in the midst of a great expectation, his renowned paper “Cervantes”, where he glosses the figure and the work of the author of “Don Quixote de la Mancha”. Born in A Coruña in 1869 of Asturian parents, Menéndez Pidal always maintained a close relationship with Catalonia, which led him to get closer and actively participate both in the activity of the at that time Academy of Doctors of the University District of Barcelona and in the Philology Section of the Institute of Catalan Studies.

During his long career as a researcher, Menéndez Pidal managed to recover the tradition of Hispanic culture -not only Spanish nor in Castilian language-, both in the study of the history of peninsular languages ​​and of the Romancero. He reconstructed, most of the time with materials of first hand, the pre-Roman Hispania, the Roman, the Gothic, the Islamic Andalusia, the Neo-Gothic Hispania and the medieval Spain and the classical centuries, valuing their achievements and their shortcomings. With his hard work he rescued from oblivion facts and literary works not well valued in this time, greatly expanding the living cultural heritage of the past. His scientific interest wasn’t limited to the observation and reconstruction of facts, but he introduced in historical studies conceptual and methodological details that his European teachers didn’t provide him and that they remain valid and current.

Great compiler of the Spanish Romance and literature of the Golden Age, in 1900 he married María Goyri, the first woman who did official studies in Philosophy and Literature (1896). In their honeymoon they discovered both the persistence of the Spanish Romancero as oral literature and began to collect many romances in successive excursions through the lands of Old Castile. Elected for the Royal Spanish Academy of Language in 1901, his teacher Menéndez Pelayo delivered the welcome speech in this institution that he came to preside over. In 1912 he entered at the Spanish Royal Academy of History and in 1914 he founded the “Revista de Filología Española” (Spanish Philology Magazine), the germ of the constitution of these studies.

Among his strictly philological works are, among many others, “Manual elemental de gramática histórica española” (Elementary guide of Spanish historical grammar) (1904), successively expanded and corrected and whose importance derives from having implemented scientific methods in Hispanic philology; “Orígenes del español” (Origins of Spanish language) (1926), analysis of the early days of Castilian language; “Cristóbal Colón y otros ensayos” (Christopher Columbus and other essays) (1942), in which he analyzes the linguistic and stylistic particularities of Saint Theresa of Avila or Christopher Columbus, and “Toponimia prerrománica hispánica” (Hispanic pre-Romanesque toponymy) (1953). In addition to that “Cervantes” that the Royal European Academy of Doctors-Barcelona 1914 treasures with zeal and pride.

Tribuna Plural, the magazine of the Royal Academy, already appears in the reference directories Dialnet and Rebiun