The YouTube channel of the Royal European Academy of Doctors-Barcelona 1914 (RAED) already has the video summary of the act of admission as corresponding academician for Mexico of Judge Jesús Gerardo Sotomayor, which was held in Barcelona on 30 October. The recipient read his admission speech “La influencia del derecho español en México” (The influence of Spanish law in Mexico). The full academician Jordi Martí answered him on behalf of the RAED.

A graduate of the Autonomous University of Coahuila and the holder of a doctorate awarded by the Autonomous University of Northwest Mexico, Sotomayor has a long career as a lawyer, teacher and researcher. He was director of the Faculty of Law of the Autonomous University of Coahuila and established the first programme of postgraduate studies in Law in Coahuila and Durango. After a long career as head of various courts, he is currently a magistrate of the Superior Court of Justice of the State of Coahuila. His career has earned him several recognitions, including the Centennial Medal of the RAED. He has published numerous specialised monographs in Advocacy and Criminal and Civil Law and has brought to light the details of historical judicial processes. 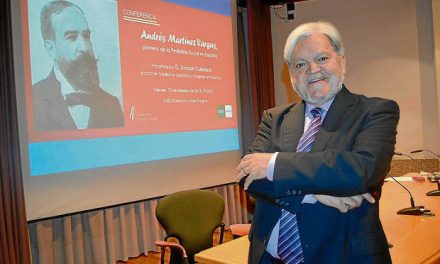 The legacy of Martínez Vargas