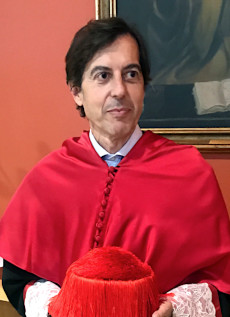 He studied at the Universidad Pontificia de Comillas, ICADE, in Madrid. In 1988 he won the competitive examination for the title of Notary, whose profession he currently exercises. As a Notary, he has served in the Illustrious Notary Colleges of Castilla y León, Andalusia, Asturias and Catalonia, performing management and representation functions. Doctor of Law from the Autonomous University of Barcelona (UAB).

He is the author of numerous works, writings, and articles on Private Law and legal thought. He is a member of various forums for political-social reflection and current affairs analysis. His collaboration in the university world is frequent; having been appointed director of the Professional Advisory Council of the Graduate School of the Autonomous University of Barcelona (2016-2020).