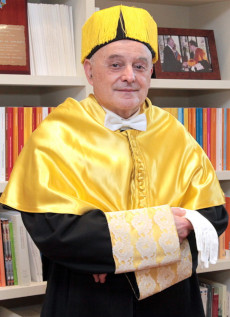 CAMIL ANDREU CASTELO-BRANCO i FLORES, MD, MSc, PhD. He is Professor of Gynecology and Obstetrics and director of the Department of Surgery and Medical-Surgical Specialties. He is in charge of Gynecological Endocrinology and the Working Group of Clinical Sexology, as well as teaching coordinator of the Hospital Clínic de Barcelona. He graduated from Faculty of Medicine, University of Barcelona, graduating in 1985 and obtaining an Extraordinary Degree Award. He later received his doctorate in 1999, obtaining the extraordinary prize of doctorate. She completed her training as an obstetrician and gynecologist at Hospital Clínic, where he entered as a doctor resident until reaching the highest category of professional promotion.

In 1988, still as a resident, he founded the first one menopause unit in a Catalan public hospital and the second in Spain and since then the institution has become one of the reference centers for menopause and gynecological endocrinology. The unit gradually expanded the activity being a pioneer in surgical techniques Reconstruction of Mullarian Anomalies is currently a referral center where patients are referred across the state to solve complex developmental anomalies. It was also to follow in the footsteps of the incorporation of minimally invasive surgery in a gynecological surgery as part of the approach common in many patients today.

His activity also has to do with sexology, being the director of the master’s degree in Clinical Sexology since 2016 and having created a postgraduate course for doctors in Sexology and Sex Education himself year.

He has written over 450 original articles and reviews on indexed national and international journals (70% a first and second quartile magazines, Impact Factor > 575 index h: 42), mostly in the field of gynecological endocrinology and clinical sexology. He has been a guest lecturer and lectured nationally and internationally, having been named a Free Lecturer of the University of Buenos Aires. He has been a receiver of numerous research grants, both public (from the Ministries of Education and Health) as private (Industry) and has given more than 534 lectures in national and international scientific meetings.

He is the author or collaborator of more than 232 works with ISBNs related to the specialty.