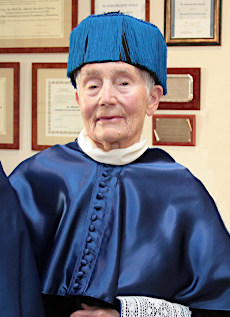 Hélène Langevin-Joliot is the granddaughter of Pierre and Marie Curie. CNRS Research Director, all of her research focuses on fundamental nuclear physics.
After working on nuclear spectroscopy and experiments on the non-conservation of parity, she and her group are moving toward the study of nuclear reactions that have become accessible as accelerators at the Institute of Nuclear Physics in Orsay. This research focuses in particular on giant structures in medium and heavy nuclei with high excitation energy, thus revealing complex underlying phenomena, the couplings of individual states of holes or particles with surface vibrations.
Also, she was a member of the CNRS Scientific Council and president of its Nuclear Physics section, member of the first Scientific Council of the Parliamentary Office for Scientific and Technological Decisions.
Part of her activity has been dedicated to the preservation of the Curie and Joliot-Curie archives and the promotion of scientific culture in the population and educational establishments. She is the president of the Rationalist Union, she speaks at numerous conferences on different aspects of the role of science and technology in society.