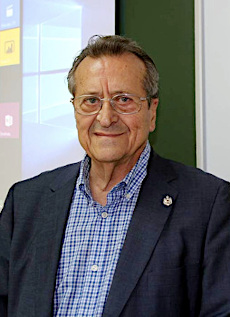 Dr. in Engineering of Roads, Canals and Ports, Dr. in Theology, Dr. in Philosophy, Dr. in Sociology, Dr. in Medicine and Dr. in Hispanic Philology

Professor of Physical Foundations, University of Cantabria (1977-87), of which he was Rector (1984-86). Founder of the Association of Friends of Scientific Culture, of which he has been president since 1983.

Professor of Applied Physics. Polytechnic University of Madrid (1987-2012). Medal of Honor for the Promotion of Invention (1995).

Academic of Honor of the Royal Academies of Medical Sciences of Cantabria (2000), of Medicine of Santa Cruz de Tenerife (2009), of Valencian Culture (2014), of Sciences, Fine Arts and Good Letters of Écija (2015), Assemblyman of Honor of the Literary Friendly Assembly (2007) and Fellow of the World Academy of Art and Science (2019).

Numerary Academician Promoter of the Academy of Sciences, Engineering and Humanities of Lanzarote (2003).

Biographer of Leonardo Torres Quevedo (Molledo, 1852; Madrid, 1936), he is Molledo’s adoptive son, a condition he shares with Miguel Delibes.