Dec 4, 2019 | Academicians of our centennial history

The Royal European Academy of Doctors-Barcelona 1914 (RAED) continues with the series dedicated to the most notable academicians of its centennial history and dedicates this 20th installment, like the previous three, to the fourth of the presidents that it has had since its founding early 20th century until completing a cycle dedicated to all its top institutional representatives already missing. In this case the figure of Jorge Xifra Heras is remembered. He held the position of dean-president of the so-called Academy of Doctors of the University District of Barcelona between 1964 and 1979. Another of the great figures of science and thought that have formed part of the RAED and that the current Government Board wants to thank, acknowledge and claim, in the conviction that who has no memory, has no future. The selection of these select academicians, from all fields of knowledge, is the result of research carried out for the publication of the “Book of the Centenary” of the Royal Academy, published four years ago. Personalities that transcend their historical context to appear today as referents of knowledge.

Born in Figueres in 1926, Xifra received a doctorate in Law and Political Science and assumed the Chair of Public Law, State Theory and Sociology at the University of Barcelona. Also, in 1963 he was appointed director of the Institute of Social Sciences in Barcelona and of the School of Public Relations of the University of Barcelona, ​​an institution closely linked to the academy during his years as president. He was also vicepresident of the Spanish delegation of the International Association of Studies and Research on Information. He is the author of reference works such as “El condado (the county) en el Reino Unido y en los Estados Unidos” (The county in the United Kingdom and the United States), “La información. Análisis de una libertad frustrada” (Information. Analysis of a frustrated freedom), “Instituciones y sistemas políticos. La estructura constitucional de España” (Institutions and political systems. constitutional structure of Spain), “Introducción al estudio de las modernas tendencias políticas: ensayo sobre la intensidad y subjetivación del poder” (Introduction to the study of modern political trends: essay on the intensity and subjectivation of power), “Las ideologías del poder en la antigüedad” (The ideologies of power in antiquity), “Constitucions, partits i autonomies (1808-1978)” (Constitutions, parties and autonomies) or “Introducción al estudio de las modernas tendencias políticas” (Introduction to the study of modern political trends), among others. His teaching and research work earned him recognition with the Order of Isabel the Catholic.

Elected president of the Academy after the disappearance of Guillermo de Benavent, his work focused on providing the institution with a cycle of activities of academic content with outstanding figures from all fields of knowledge, the edition of the first Yearbooks with scientific works presented and the implementation of an intense internal activity through the regular convening of ordinary and extraordinary general meetings. At this time, the Academy began a fluid institutional relationship with the City Council and the University of Barcelona, ​​where it established its headquarters.

The mandate of Xifra also stood out for the activation of the Academy by increasing the number of members, who came to exceed 250 academicians and 50 honorary academicians, and providing it with a budget in line with its activity. These are years in which the Governing Board approves admission as honorary academicians of outstanding figures and that the institution is professionalized promptly and makes its first contracts for the organization of some events, such as the first Doctoral Symposium, and in which the inaugurations of each academic year become a reference event. In 1977, still under the presidency of Xifra, the institution was renamed the Academy of Doctors of Catalonia and the Balearic Islands. 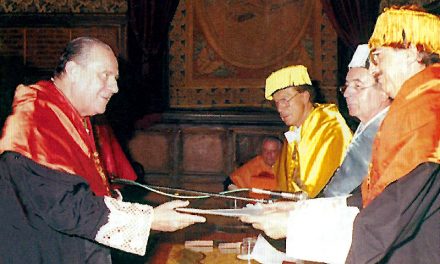